Posted by Emily Martin on Aug 30, 2017 in Storytelling | No Comments 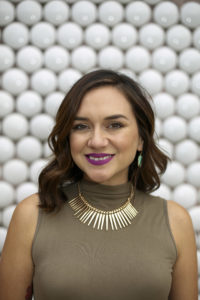 As a first-generation American growing up in poverty, I never expected to go to college. It wasn’t until I started to excel in my career as a hairstylist and makeup artist that I gained the courage and confidence to return to community college and pursue my education. Shortly after returning to school I learned that I was pregnant. I remember sitting on the bathroom floor the night I found out sobbing, in awe of the power of these two little lines that read pregnant. A rush of emotion overcame me as I thought of all I had worked for, what my future would look like, and what my family would think. My sisters and many other loved ones were teenage mothers. Growing up, I witnessed the struggles they faced as the result of unplanned teenage pregnancy—struggles that were exacerbated by our socio-economic status and our status as immigrants and first-generation Americans. While I was not a teenager, I was in no position to be a mother. I decided then and there that I would have an abortion. At the time, I chose to keep my decision a secret. I was afraid my family and friends would judge me. I was afraid I had done something wrong. You see, the stigma folks face from their decision to have an abortion can sometimes be as powerful as the systemic barriers and lack of opportunity they face toward accessing one.

While I struggled to come up with the money to fund my abortion and dealt with suppressed stigma for many years, I consider myself lucky. Many of the laws that are in place today did not keep me from accessing abortion care and I was also able to have my procedure in my hometown, the beautiful city of Austin, Texas. My city is one whose citizens and representatives know the value of respecting an individual’s reproductive health care decisions. I share my story not only to reach others who may be in a similar position and let them know they aren’t alone, but to take a stand against the deliberate, repeated attacks on access to abortion care that we face in this state and nation. I am proud to be a part of the Repro Power TX initiative, a first-of-its-kind partnership between Texas abortion funds and NARAL Pro-Choice Texas, because I demand a future with access to stigma-free abortion care and the opportunity that comes along with it.

I’m proud to say that I am now not only a first-generation American, but also a first-generation college graduate from the University of Texas at Austin. Had it not been for the opportunity to pursue my education and my reproductive autonomy I would not be who I am today. Today, I advocate for everyone’s access to abortion care and the ability for them to plan and provide for the families they want on their volition in an environment that centers their interests and fosters their success. Local initiatives and grassroots movements like Repro Power are where we get started in building the equitable future that we all deserve. Join me in signing on and making your voice heard at events in Houston, Dallas, El Paso and Austin.