Posted by Emily Martin on Sep 18, 2017 in Storytelling | No Comments 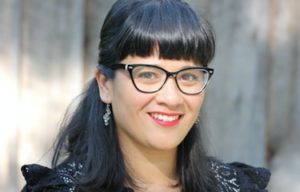 For a long time, I felt inauthentic — because, as someone who works for reproductive justice and reproductive rights, I had never told my abortion story. Even though my own father was an abortion provider in Texas for 25 years, and I work specifically on or advocating for proactive abortion rights policies, I had never shared my story. But not because I was hesitant about the abortion itself. I was hesitant because my abortion story is my mental health story and the stigma surrounding both topics fuels my hesitation. But I am starting to share. And my story starts with another woman’s story.

It was 2013 and I’d just moved back to Texas from New York, where I’d gone to law school. My husband and I were living at my mother’s house in San Antonio. We drove up to Austin with our toddler and baby in tow to join the people’s filibuster— the testimony that eventually led to Wendy Davis’ 13-hour stand for reproductive rights at the Texas state capitol.

Public speaking is one of my biggest fears, so I was watching the other testimonies, trying to gain insight into what I should say and how I should say it. I was watching my kids, eating snacks, thinking about the story I would tell. I would tell the story about my dad providing abortion care to people in Central and South Texas. Anti-abortion advocates depicted providers as an industrial complex interested only in profit, and I knew from my own family experience that that was not true. My dad was motivated by giving individuals bodily autonomy, self-determination, and his commitment was demonstrated by wearing a Kevlar vest to work, moving us to gated communities, and shielding us from the terrorism he encountered every day. I wanted to contrast the anti-abortion movement’s narrative and tell a story. My dad’s story. But not my own story. Not yet.

Instead, I was taking mental notes: did the other people testifying seem nervous? How long did they talk? Did they look straight ahead? At one point, I heard one woman tell the committee about how her mental illness and treatment would prevent her from having a healthy pregnancy. She would have to make the choice of having a healthy pregnancy while sacrificing her mental health, or having an abortion and continuing mental health stability. And because of that, she was grateful for her right to choose abortion. Hearing her articulate her two options resonated with me like no other abortion story ever has. My eyes widened, tunnel vision set in. I was so focused, my husband had to run and chase after our toddler.

I had heard many abortion stories before. But this woman’s story echoed my own struggle with mental illness and the underlying factor for why I had an abortion when I was 25.

Fourteen years ago, I wasn’t functioning at all. I hadn’t been functioning properly since I had left high school. I was cycling through college semesters in manic and depressive phases, in contrast to my high school persona of the consummate over-achiever. I was approaching rock bottom.

I found out I was pregnant shortly after my birthday — my boyfriend and I were at my favorite Mexican restaurant, but I was so nauseous I couldn’t eat. I knew I wasn’t hungover. I was pregnant. There was no question that I was going to have an abortion. I made my decision instantly and I never questioned it before or after. I knew I was unfit to be a mother, and if I put the child up for adoption, I would be weeping over it for the rest of my life.

I was scared, but I told my dad, and he and my partner, helped me access the abortion care I needed.

But my personal life was getting more complicated. My partner and I broke up, and my father was diagnosed with a brain tumor. I knew I had to seek help if I was going to get through the days, weeks and months to come. So I did.

Just as my father was getting sick, I was finally getting better. I was finally in therapy, and after a yearlong search for the right balance of medications, I was finding treatment that allowed me to still be Aimee, to be sad or scared or happy, without being numb.

One day, I took my father to the dog park with me with me and my pug. He’d never been, but I wanted to address all the unresolved issues between us. He acknowledged my feelings, apologized, and I was able to forgive him and we moved on.

My dad was raised by a single woman who immigrated from Mexico. She worked three jobs in a cannery to support her three children. My father, in turn, worked three jobs to put himself through school, college and medical school. The one thing he would say to me, growing up, was that education was something no one could ever take away from you. As a Mexican American, he was aware that his Mexican Filipina daughter would probably start life with things stacked against her. But education would make all the difference.

For me, my abortion was the beginning of the path that led me to reconnect with my partner, finish college, go to law school, and start my family when I was ready. My abortion embodied the self-determination through bodily autonomy that my dad dedicated his life to and had raised me to believe in. I wouldn’t have had that day with him at the dog park if I hadn’t had my abortion. I couldn’t have cared for him with a toddler at home. But I had that time with my dad, and before he died, I was able to tell him that I’d finally decided to go to law school. So that I could go on to work for reproductive rights. He had aphasia then, so it was hard for him to talk, but he told me he knew I could do it. I watched as the tears fell down his face.

Making that promise to my dad is what got me through law school. What would have happened to me if I’d become that other Aimee 14 years ago? I would have self-destructed. I would not have snapped out of it. I needed the time after my abortion to focus on myself. Focus on getting help. Focus on finding the right treatment. And focus on getting better. That would not have been possible if I’d been caring for a child, or pining for a child I’d given up. Today, as a mom by choice, I know for sure: parenting is something that you have to want to do. It would have been the one more thing on my plate that I couldn’t have handled. It would have been the straw that broke me. Because of that choice, I’m able to be the best mother to my children now, because I was able to heal myself, I had found myself, and I was ready and capable of making them my priority.

I am telling my story now because I’m trying to do for others what that brave woman at the Texas Capitol did for me. When she talked openly about mental illness and abortion, despite the stigma associated with both issues, she helped normalize them both for me. In the U.S., one in three people will have abortions in their lifetime, and one in five people suffer from mental illness. But I rarely hear anyone talk about these two together until that day four years ago at the Texas Capitol. The reason I have started telling my story, the reason that I am here now, at the heart of it, is because I want people to feel less lonely, and take comfort that they are not alone. I want people to hear my story, so that someday, maybe, they can tell their own story.

Aimee first shared her story on the Traitor Radio podcast, which you can listen to by clicking here. She will be sharing a version at the Repro Power Austin speakout on September 27.

Photo courtesy of WeTestify, a storytelling program of the National Network of Abortion Funds.